#ShareAdvent Joy to the World

Last year I had such fun doing #ShareAdvent, set up by Anna from Skin & Blister. I was so pleased when she said she was doing it again this year. I'm going to try and get back in the blogging swing of things and do a post each day, following the prompts. I can't promise anything, though, as work is a little bit crazy at the moment. 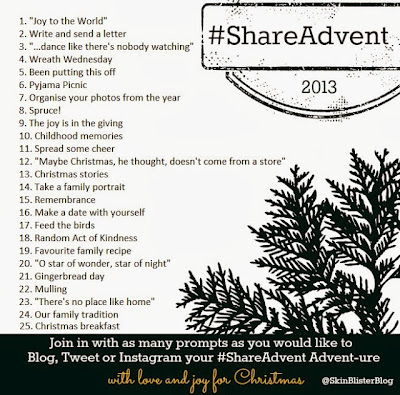 Joy to the world is a tough one. It shouldn't be, but often it's a little difficult to see much joy  in the world. News stories revolve around the terrible things that happen it's hard to forget sometimes that there's actually more good than bad. I know I remember the bad things happening in my life more than I do the good. It's easy to think things are really difficult, or that the world is a scary, bad place.

Here's the truth. The world can be scary and bad sometimes. But for the most part, we're actually safer than we have been in years. In the UK, reported crime has reduced, as has recorded crime. The most recent crime statistics show that recorded crime is down by 8%, with a 38% decrease in reported crime since 2002. Recorded crime is down, too (not all crime is reported, but there is a crime survey done every year that tries to capture all experiences of crime). It's down by 5%. We're still in a recession, personally I would expect crime rates to increase. And yet they haven't. Every single force area reported a reduction in reported crime last year. Still, though, perception of crime is that it's on the increase. Perhaps because that's the main thing that the news reports on? (1)

In a year when American football players have been in the news for all the wrong reasons, this story from a middle school in the US was such a lovely thing to read.

I know you've probably all seen this, but I never fail to be amazed by the fact so many people gathered together to make a little boys dream come true. The Make A Wish Foundation is absolutely wonderful, but it only works because people people give their time, money or resources to help and make wishes become reality. All charities exist only because the general public support them, and this allows so much help to go to those who need it the most.

I've learnt in recent weeks that just walking to a car can bring joy. That article has a slideshow at the end that brought a huge smile on my face, including this video of a man dancing to Poker Face.

Then there's the Dance Pony Dance advert. I know it's trying to get me to buy their product, but I don't care. It never gets old.

This article on Huffington Post led me to a few of the stories I've linked to on here. There are so many kind, wonderful people doing small things that make the day of those around them.

No, it's not a John Lewis advert:


I hope you all have a wonderful Sunday and that this Christmas period brings you more joy than stress.