The wedding of Mr and Mrs Poole

Way back at the end of August, Corey and I headed south west to Bristol to be guests at the wedding of Katy and Dan. Katy is another person I'd met through Any Other Woman, and we spent much of the beginning half of the year chatting on twitter and via email. I never expected to be invited to her wedding, and was pretty excited when the invite turned up at work.

Getting down there was a lot more stressful than it should have been. For one thing, everything seemed to be conspiring against us to actually get there on the first place. We finally booked a hire car, but when Corey went to pick it up, he was told as he didn't have proof of his address here, and as the electoral role is rather confused as to where he lives now (what with us and his parents moving in the space of 2 months!), he may not be able to get the car. The silly man then texted me this, causing me to panic, wondering how you tell a bride the day before her wedding that, actually, you won't be coming after all. Luckily Corey had notified the bank of his change of details, so he headed there to get a printed out statement. Why he couldn't have told me this in a "you'll quite enjoy this story" tale, after he'd managed to get the car, I'll never know. The drive down should have been straightforward. We ensured we had an hour to spare, just in case we had any reason to stop, or just in case we hit traffic.

We accidentally hit the edge of Coventry instead.

That should have been all right, but it turns out GoogleMaps lied about how long it would take to get to Bristol. It actually takes about half an hour longer. We got to Bristol and proceeded to hit rain and traffic. Corey was taking this all rather calmly, which is a good thing as I was a pile of stress and fury next to him. I started moaning at people crossing the road too slowly, exclaiming loudly about why every bloody bus in the city seemed to be pulling in front of us and cursing every single red light. Laura, who had also been invited, started tweeting me to let me know she was there. She answered all my frantic responses calmly and let me know we'd be able to sneak in the back if the worst came to the worst.

It hit 1pm. The time the ceremony was due to start. We still weren't there. Just after 1 we pulled up next to the church, I saw the photographer taking pictures, pointed to a parking space, jumped out the car, threw Corey's shirt at him and we ran. I asked a confused looking bridesmaid (to be fair, I was red face and wild eyed) if we were too late, she said no (duh, bridesmaids wouldn't be lingering in the entrance of a church if it was too late), dashed passed the vicar as he gave us a cheery hello and scooted next to Laura.

Heart still pounding, I took a few breaths and tried to stop shaking as Corey, cool as a cucumber, took a seat next to me.

In walked this vision 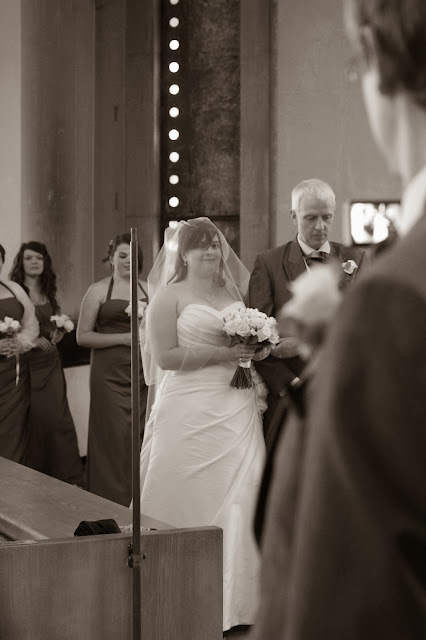 And all the stressing out was worth it. Katy looked incredible and the pride on her father's face as he walked her down the aisle brought a lump to my throat. The ceremony was lovely. I enjoyed singing my heart out to the hymns and Corey enjoyed looking at the architectural detail of the church (you can't take him anywhere).

At the end, as they walked back down the aisle, I got my first proper look at Dan. I don't think I've ever seen a happier groom. Both of them looked so pleased, holding hands as they walked out of the church. We all rushed outside to throw confetti and take some more photographs. There was a Brownie guard of honour, but I wasn't able to catch a glimpse of it. I felt rude trying to push in front of relatives and friends, so I hung at the back and waited for my moment.

It was worth the wait 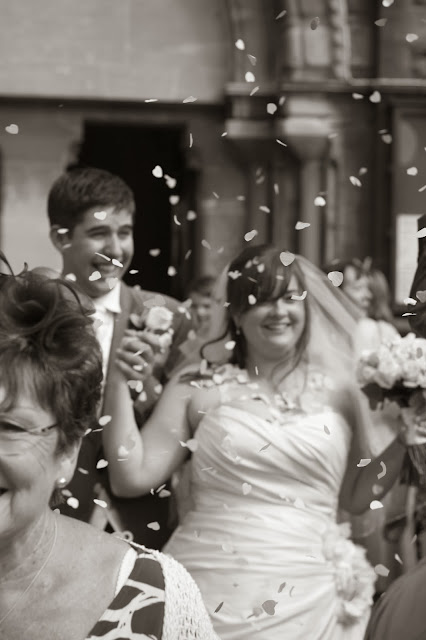 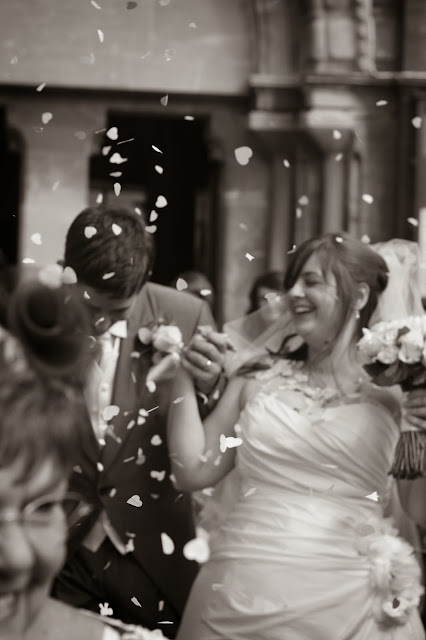 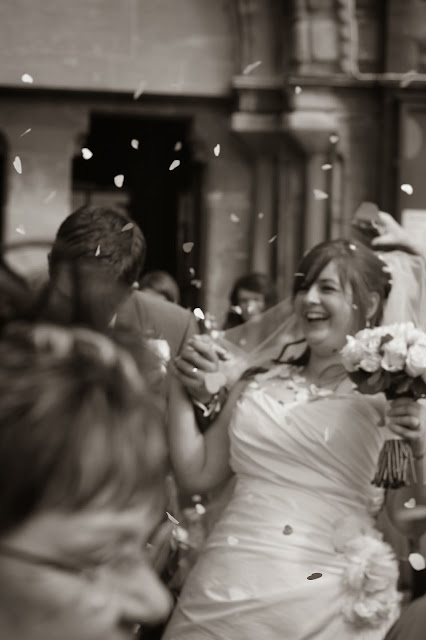 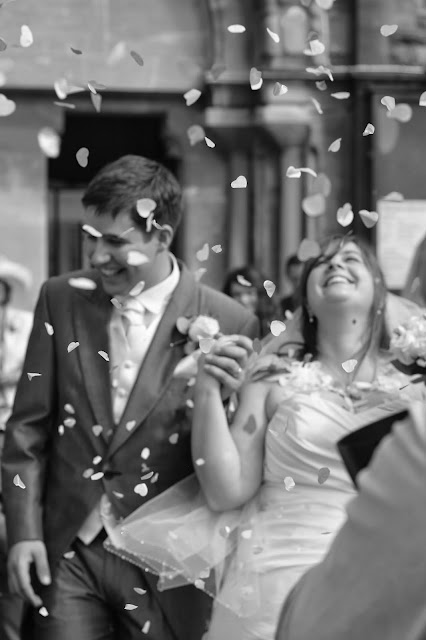 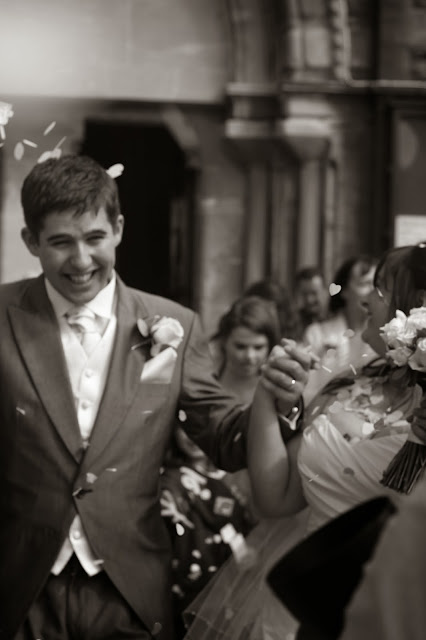 As the guests enthusiastically threw confetti over them, Katy and Dan laughed their way to the car, hands clasped tightly together, joyful expressions on their faces. One glass of champagne later, handed to them by their rather dapper chauffeur, they were off. 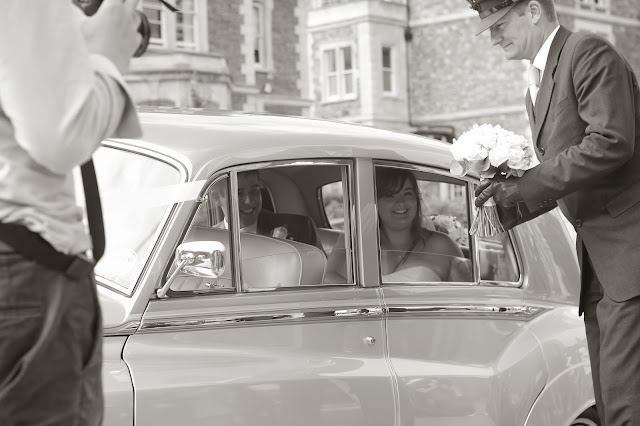 Laura, Corey and I headed to meet Chris, Laura's husband. We got a bite to eat and then headed to a pub where we settled for the remainder of the afternoon. While Laura and I worked out how to use our camera's, Chris and Corey got down to the serious business of making various things out of Jenga. 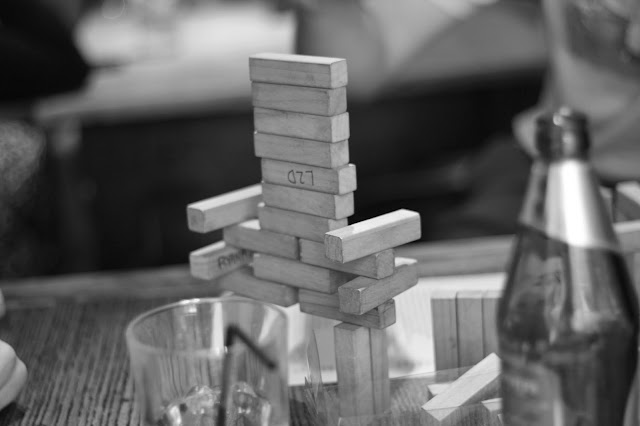 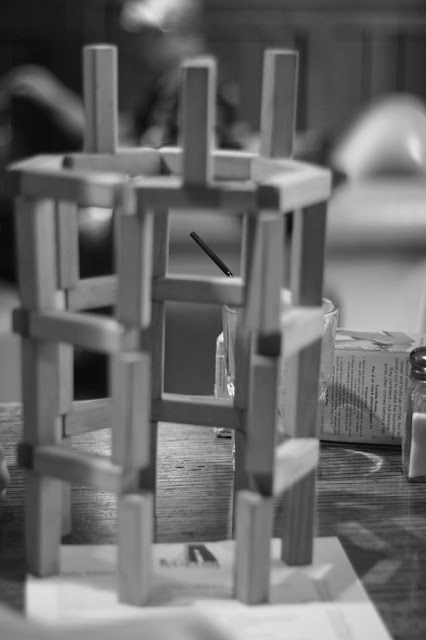 Before we knew it, it was time to hop into our respective cars and make our way to Coombe Lodge. The sun was setting, throwing glorious reds, oranges and yellows across the fluffy clouds in the sky as we drove through the country lanes.

Coombe Lodge was a beautiful setting for a wedding. As the sun set and the lights turned on, we found Katy and said hello and made sure to let her know how gorgeous she looked. She still had a beaming smile on her face and was just radiating happiness. Inside, the band got ready, we got some drinks and headed in for the cutting of the cake and the first dance. 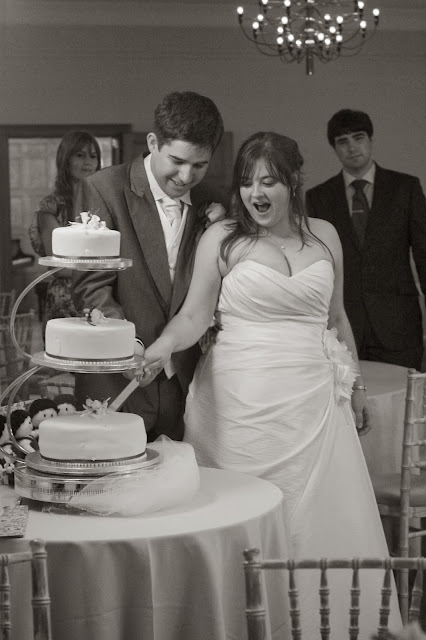 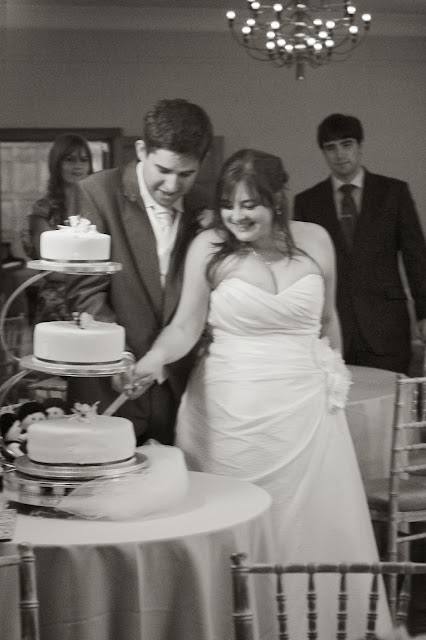 Dan and Katy headed onto the floor where they slowly danced to Bon Jovi. There's something magical about a first dance at a wedding. Two people, their arms around one another, looking into the eyes of the other, love shining from them both. They look like their in a world of their own, a little bubble where, for those few minutes, no one else exists. At some point they gestured for the rest of us to join in, and the dance floor filled up rather quickly.

The evening went by in a blur of dancing, silly photo booth shoots, chatting, laughing and good food. We had to go early as we were driving back to Leicester that night. We said our goodbyes and reluctantly made our way home.

The drive back was as tedious as the drive there, due to the M5 being shut in several parts. But this time there was no stress, only the memories of a wonderful day.

Thank you, Katy and Dan, for inviting us to share it with you. 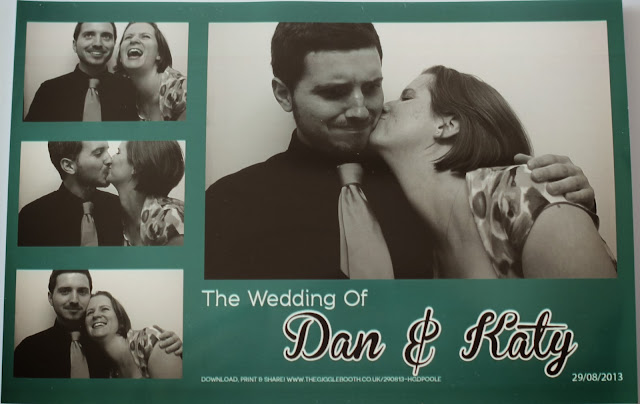 We had a brilliant time.
Posted by Crysta at 18:51