This is the year of challenging myself. Part of the challenge was to get out and meet new people. At first it was difficult. It's hard to not be nervous before meeting people you've only ever talked to online. Questions run through your head. What if they don't like me? What if I don't like them? What if they're not who they say they are and this is just one big trap that's going to end up with me turning up to a party in fancy dress only to discover everyone's in normal clothes and laughing at me?

It could happen. I've seen films where it's happened.

However, after Manchester last December, the hen do in March, individual meetings, heading down to London for Race for Life and cake meet ups I can say I am no longer nervous about a meet up. In fact, to be honest with you, once everyone has said goodbye and headed home, I'm left hoping there will be another one soon. Saturday was one such meet up. A wonderful afternoon, where it felt like I'd known everyone for years and where time flew by far too quickly.

We met up in a group at Birmingham train station and wandered over, buggies, babies and all, towards Hotel la Tour. We made our way through the revolving doors and were shown into a lovely private room where we spent the afternoon munching on the food that was brought out. And what lovely food it was, too. 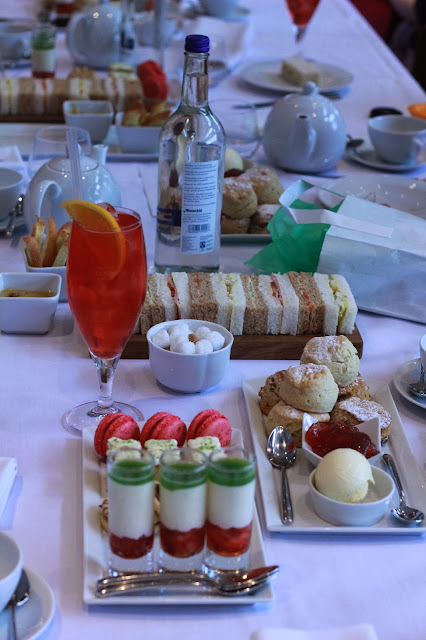 The sandwiches were lovely. There was cucumber, coronation chicken, smoked salmon and I think something else, but I can't really remember. We were all chatting so much that I didn't pay as much attention as I should have! There were plain scones and fruit scones, with more than enough cream and jam. I could have nibbled on the crispy bread and Welsh rarebit all day long. The only thing I wasn't all that keen on were the desserts. The pana cotta was amazing, once you'd overcome the weird cucumber topping. I don't really understand why it was on there, as it didn't add much to the flavour and seemed rather out of place. I made the mistake of having the jammy dodger and a macaroon before I tried the cake. They were a tad too chocolatey, and that made me feel a little ill and sweeted out. Which meant I couldn't really taste the cake once I got around to trying. However, I can imagine that most other people would love it. I just can't have to much chocolate, as my irritating stomach doesn't like it! The staff at the hotel were perfectly attentive, and lovely to chat to, ensuring we were topped up with our pots of tea. They also brought out plenty of food, enough for adults and babies alike!

As for the company, well, I've already mentioned, everyone was lovely. It was brilliant getting to know some people I'd only ever talked to online, and others who I'd not known until the meet up was arranged. The best thing about this meet up, though, were the plus ones. 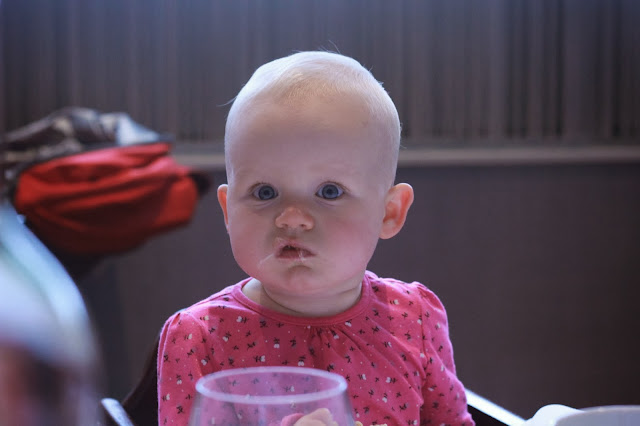 Ava, fast asleep in her pram at the start of the afternoon, woke up to discover herself in a new room, surrounded by a group of strange ladies. After looking around, slightly confused, she took it all in her stride and settled down to lunch. 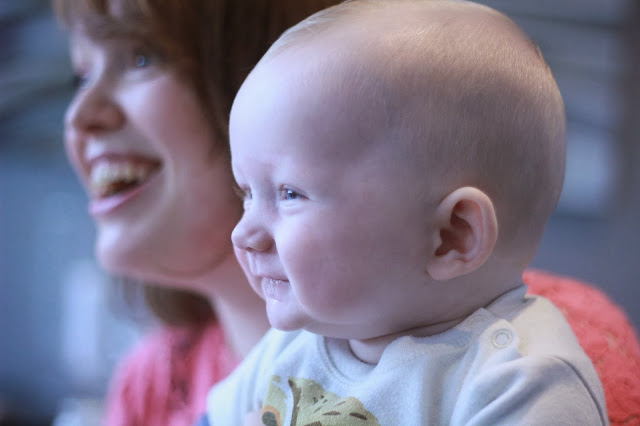 I'm pretty sure Freddie enjoyed being the only boy in the room. He listened intently to my advice to him not to grow up too quickly, and even chuckled at a few of my bad owl jokes. 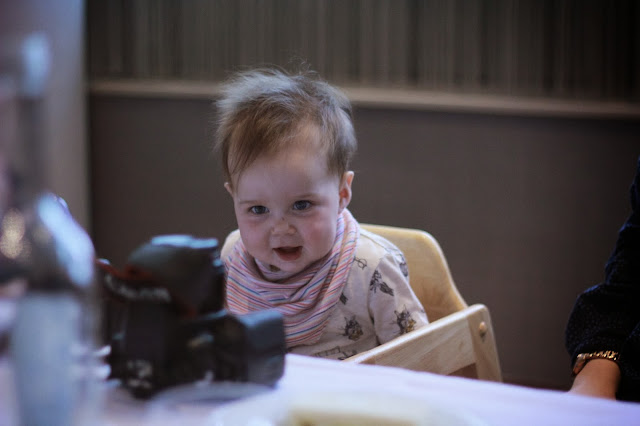 Olive was bubbly and cheerful throughout. She's also brilliant around a camera. Once you point it towards her, she gives you a huge grin. Unfortunately every time she smiled at me, my exposure was all wrong, but she was certainly smiling at Hollie's camera on the table! 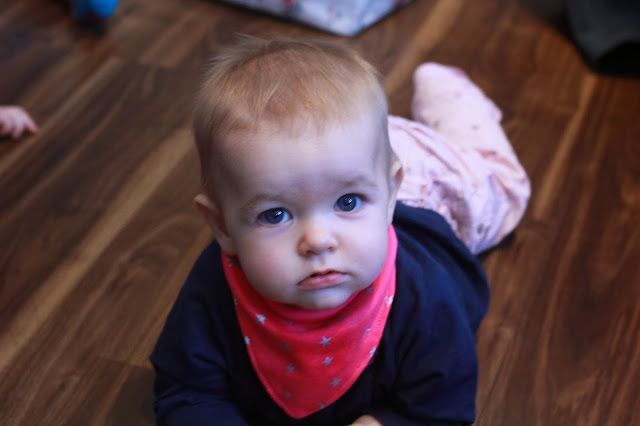 Stella is quite possibly the most thoughtful baby I've ever met. You just know she's listening to what you're saying, and pondering over it. I'm sure once she starts chatting she'll be able to tell you exactly what she's been thinking about all this time.

While the adults were getting to know one another, the babies were getting along pretty well, too. Stella and Olive, sat next to one another, seemed to be discussing the merits of the different sandwiches. I'm pretty sure that as Katie and Hollie chatted, Ava and Olive were arranging their next meet up. If only the adults were listening... Freddie had a nap while the girls got together on one side of the room for a bit of a play. 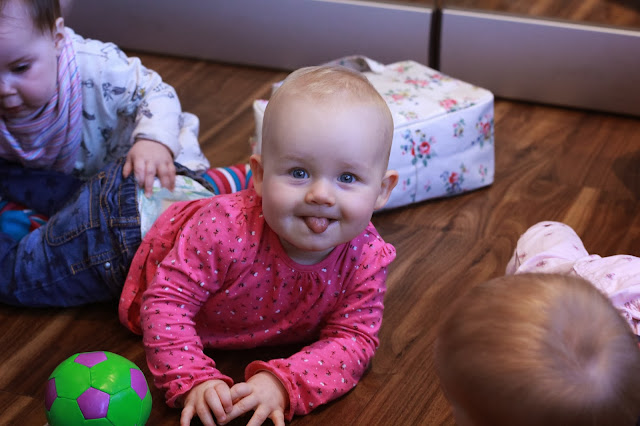 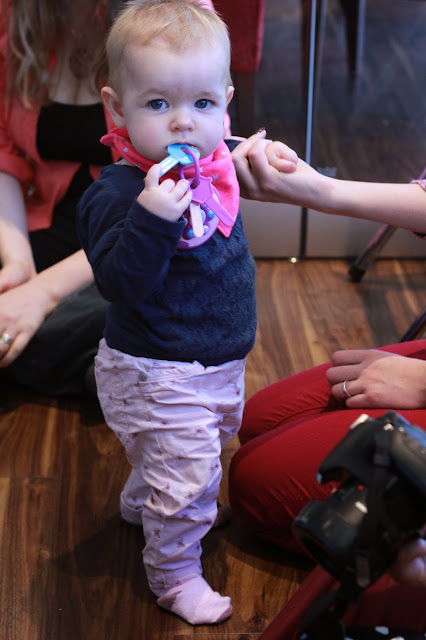 By the end of it, we were all full, pleasantly tired and pretty determined to meet up as soon as possible. We had to make our way back to the station and head back home again. Most of us had to walk, although others of us were able to have a nice nap on the way... 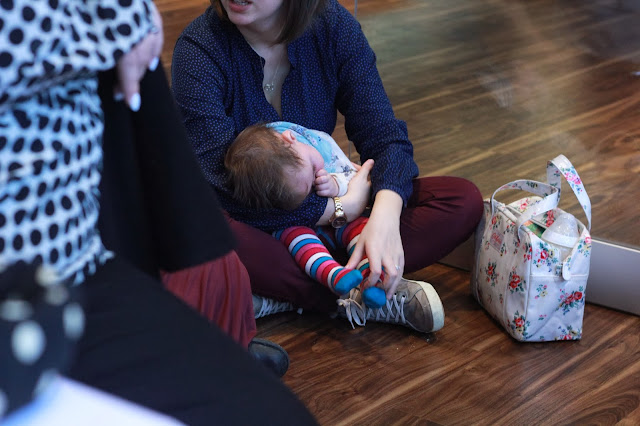 Thank you, Hollie, for arranging a meet up at such a perfect location. It was absolutely wonderful to meet everyone and their little ones.
Posted by Crysta at 22:48