A ceiling over our heads.

So, on January the 27th last year, in our graduation robes, Corey and I came home to discover the leak in our ceiling caused our ceiling to partially collapse. A year and nearly two months later, after issues with the upstairs neighbours, their landlords and insurance, our ceiling is finally fixed.

Before we went on holiday Corey got a call asking when he wanted it to be sorted. As we were about to go on holiday, as the week following the holiday was pretty insane for me (including a 17 hour shift at work), we asked for it to be done this week. We heard nothing until he got a text on Monday saying they were going to do it on Tuesday. Monday was spent putting as much furniture from the living room into the bedroom. So, since Monday, my bedroom has looked like this: 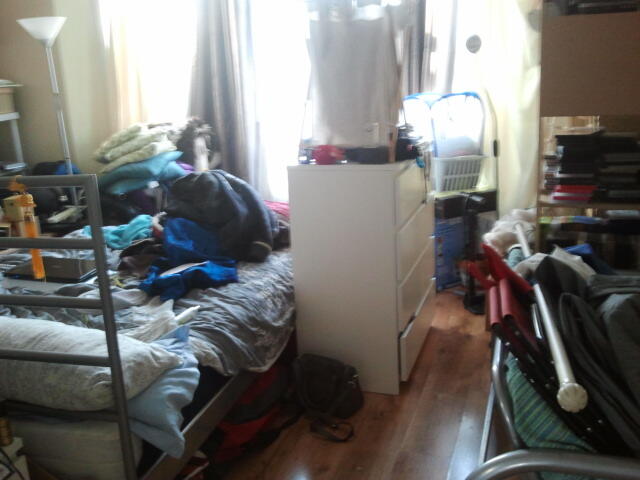 Please excuse the bad quality. My proper camera is currently in a cabinet (safely tucked away so that I don't accidentally drop something on it) and so this was taken with my phone. My current crochet project is tucked away under all those blankets, my hard drive, with all my photo's of things I want to blog about is with my camera and, well...I've had to resort to cross stitch to keep my craft fix up.

It's all for a great reason, but I was THIS CLOSE to finishing the baby boots I'm making for someone. All I had to do was sew on the buttons and tidy things up! As baby's have this irritating habit of growing rather quickly, I'm nearly 100% certain they won't fit them when they get there. Ah well, I have enough wool left over to make the bigger size!

I've also spent some time thinking about how to make the flat a place that's nice to come back to, to invite people to. Since the beginning of the year I've really been trying hard not to complain about things, and to do things to improve the situation instead. It took a lot of positive talking and politely informing Corey that his complaining is making it hard for me to be positive, but now he's on board. Less complaining, more doing!

When everything is back in order, I'll be taking pictures, telling you my ideas, as well as the problems with the flat (such as three walls in the living room can't have furniture against them due to a damp problem)* and asking if anyone else has any ideas. I am truly excited about some of the changes, particularly ones involving saving up for a proper sleeper couch!

For now, I'm unlikely to blog much. I hope to have some time over the weekend, once everything is cleaned, moved and sorted, to get back on track again.

Oh, and it's International Women's Day tomorrow. Everyone should head over to Any Other Woman tomorrow, because they are doing something special. Every hour there will be a blog post written by some of the incredible readers of the blog, talking (loosely) about what being a woman means to them. I can't wait to read them all, because I know they will all challenge me, inspire me and make me think. It's going to be great.

*We have a dehumidifier that's on for most of the day and air vents that keep air flowing through, so there's nothing further we can do about the damp other than not have furniture against the walls!
Posted by Crysta at 22:08