I saw a few people on twitter had made themselves lovely calendars for #ShareAdvent. So I thought I'd make my own, as a reminder of what to do each day.

I don't know where my calligraphy set it...I'm thinking it's somewhere under the bed. Since I moved everything in the bedroom around yesterday, I didn't particularly feel like heading back under there to find it. I also don't have nice envelopes in the house (it was too cold for me to seek some out in town), but I do have origami paper left over from last years Christmas. So I thought I'd make an origami star for each day. 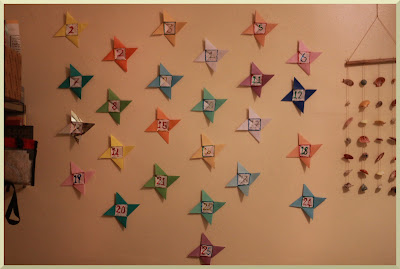 They aren't perfect (glitter glue pens don't dry very well on anything, I've discovered), but they brighten up a very plain piece of wall. 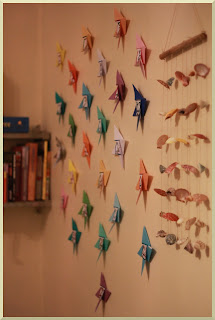 They took a while to make this afternoon, as I watched the West Wing and tried to keep warm. I used the tutorial from here. They were pretty quick to make, and after the first three I was able to make them without referring to the instructions. I'd love to try a five pointed star next time, or a different design, but as this was a brainwave I had this morning, I didn't have much time to try something more complicated out!

Oh, this doesn't mean I won't be having the traditional chocolate advent calendar, too...

Email ThisBlogThis!Share to TwitterShare to FacebookShare to Pinterest
Labels: #ShareAdvent