I'm really enjoying the #ShareAdvent challenge. Not only do I get to eat chocolate every day, and do Christmas related things, but Anna, from Skin and Blister has given me my blog topics for the month! December usually see's me becoming incredibly busy (note to self, I still have 4 presents to make before Christmas, and 15 cards to make before next week Friday!). I go slightly crazy and each evening is spent working late into the night making things, whether it's card making, baking or knitting. I love making things for people, and Christmas is a time when they are forced to smile sweetly and pretend they like them!

Today's task is to exchange gifts with someone you won't see on Christmas day. As next week involves me handing out my Secret Santa gift to someone in the office, there is only one other person I will be seeing before Christmas, but not on Christmas day. That's Corey. I couldn't exchange presents with him today as he's working late. But we did share presents on Sunday. He gave me the snowman (which is now sitting proudly on my mini Christmas tree at work! Picture will be put up on twitter now that my work account is working...) and I gave him this:

This cheeky reindeer was grinning at me from the top shelf in Homebase. It's not a traditional gift, and it's not his main Christmas gift, but I couldn't resist him.

He sits, in between my gingerbread house and nativity scene. He just looks so happy to be there, and so excited by what's around him. 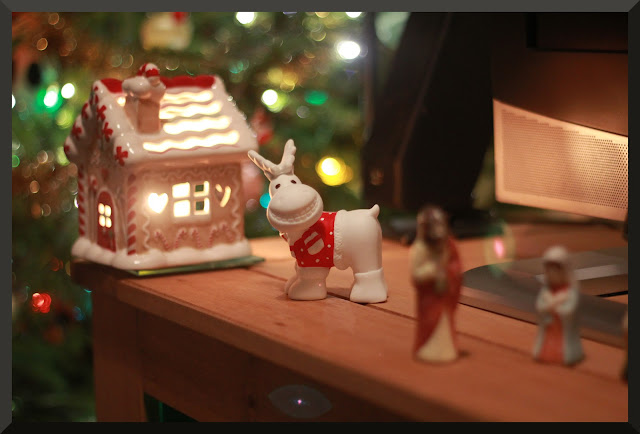 Some may feel it's inappropriate for a grinning reindeer to be stood behind Mary and Joseph, but I like to think he's just so damn pleased to be a part of it all. Corey tried to put him in place of the crib (which I don't put out until after Christmas eve), but that goes a little too far for me. I politely explained that the point is to keep that place empty, as the whole point of Advent is preparation for celebrating the birth of Christ (or at least, that's the point for me. I understand it's different for him as he isn't at all religious). He's not put anything there again...

Right, now I'm off to bake bread and mini gingerbread houses!
Posted by Crysta at 18:46

Email ThisBlogThis!Share to TwitterShare to FacebookShare to Pinterest
Labels: #ShareAdvent