Mary, Mary, quite contrary, how does your garden grow?

I got told this week that I remind a friend of Mary from the Secret Garden. After checking he didn't mean the Mary at the beginning of the book/film (depending on what you've seen. I've read one and seen the other and I love them both), he clarified his position. "You remind me of her because she likes nature, she tries to encourage the boy to come out of his tiny world, she is firm but fair and generally good at heart :)". I have to admit, I was quite chuffed with the compliment a) because its a nice description of me and b) because the book is one of my all time favourites. And I love Mary.


But now, back to my point! I do, actually, love nature. If its a sunny day, and I'm not dissertating, you'll probably find me in the park or garden. I adore gardening. Especially when you wake up one morning and find your rose bush has bloomed. 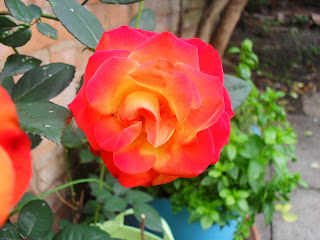 I told you I'd put some pretty pictures up! And you don't get prettier than that. Although I'm going to have to get out there and sheer off most of the leaves...The damp weather's caused my leaves to be infested with fungus :(. I bought this last year at Homebase. Not because I needed a rose bush, but it seduced me with its gorgeousness. And bright colours. On the plus side, I also seem to have an infestation of these: 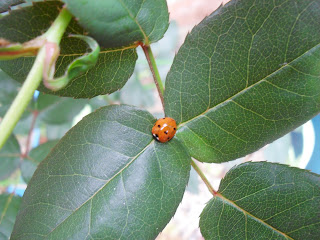 Hello my little gardeners friend! If only you ate snails as well as aphids...they've destroyed Corey's vegetables!


And, of course, I have plants for inside the house. Corey sort of bought me these. Well, by sort of bought, he intended to pay for them, but we bought a load of food alongside the plant, so ended up paying for the gerbera's using the bill money. But its the thought that counts. I've repotted them, and look what's happened! 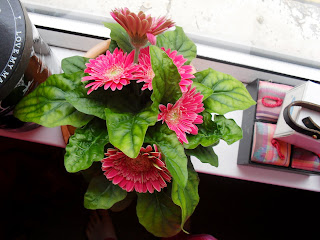 Originally there were only two flowers, but they obviously like the bigger pot, cause now I have five. 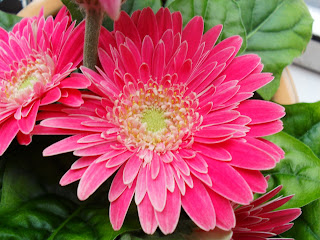 So awesomely pretty. My favourite cut flower. They make me smile every time I see them.


This orchid, however, is my favourite of them all. I bought it 6 years ago, just before going to university. It's survived Christmas and Easter holidays, where it was plonked in a bowl of water and left for two weeks. It was wonderfully cared for by a friend while I was in South Africa on my exchange year. I didn't trust my mother to remember to water it...And its still with me. It feels like an old friend, sitting there in my room. 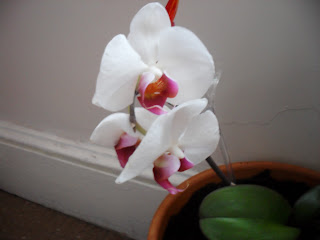 I also have two massive pots of herbs, some sweet peas that are being destroyed slowly by snails :(, a fruit tree I bought Corey, his vegetables and some carnations that I'm growing for my mother's birthday present. I am not allowed any more, because apparently our little house has no more space. And we're moving soon, hopefully. But I see gaps on the wall, and plenty of ceiling space for hanging baskets. Corey just lacks imagination...