Who am I and where do I come from?

Ok, pre post warning: I have just come from a job interview, which means my brain has melted somewhat causing me to go into a slightly crazy mood. So this post will more than likely be EVEN MORE rambly than the last. With more than a slight hint of crazy.

First off: my profile picture is of my uncle and I, not my boyfriend and I, not (as someone just asked on facebook) Daryl Fitton and I. As an aside, I never knew who Daryl Fitton was until today. Learn something new every day. Not always something USEFUL, but as long as its new, that's all that counts.

I was born, 25 or so years ago, in Cape Town, South Africa, as anyone who has known me for more than 5 minutes will know. My poor mother was put through, not only 25 hours of labour with her first child, but had to deal with a doctor who refused to listen to her. They didn't have all the posh scanning equipment they have today, and could only tell the babies position from internal examinations. So when my mother, my very young mother, insisted to the doctor that my head was by her ribs, he didn't listen. I mean, obviously he knows better than the woman who's carried me for the past 8 months. He is, after all, a doctor. He told her my head is in the right place, and that my hands are, rather cutely, on my head. All she was feeling was my bottom. He also suggested that perhaps I had a large bottom, hence the confusion. (Thanks...turns out I do have rather a large bottom, its taken me nearly 25 years to come to terms with that. But thanks, so much doctor whateveryournameis for giving me a complex straight away). Needless to say, when my foot came out soon afterwards, there was a bit of a panic as they rushed to find an anesthetist. My mother is ALWAYS right, even at 21 years of age, in labour and exhausted. Took them 2 hours to find the anesthetist, during which time my foot continued to dangle out (I have an image in my head of me trying to crawl back into the womb screaming "I DON'T WANT TO COME OUT NOW!!!"). One c-section later, with a dislocated hip and legs that needed to be repositioned correctly once a day, I was born. Crysta Anne Campbell, who put her foot in it, right from the start. I have my dad to thank for the wonderful initials my parents gave me... 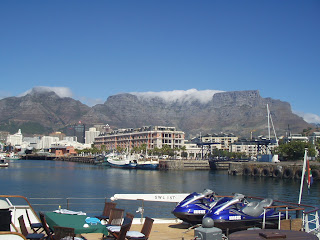 I spent the first 9 years of my life there. 9 years of tomboy in a dress, running wild and barefooted amongst my very large, slightly crazy, loving family. The summers were long and hot, the winters short (albeit cold, windy and rainy).

My love of chocolate began when I was very young. The only difference between then and now is that the mess I make isn't QUITE as bad. Oh...I also ate a live snail once at about this age. I was toddling along, sat down, picked something up...and my parents couldn't get there in time...

I loved pretty dresses, I just never knew how to keep them clean. I was climbing up trees all day, rolling down hills, running through puddles and mud, all in a dress. Often said dress would be round my ears as I hung upside down in said trees. My mother had to threaten to put me in dungarees in order to stop me flashing my knickers to all and sundry. When I was really little, I apparently used to strip off whenever the mood took me and run around naked. I'm still not too sure why my parents decided to have more children after me...

At the age of 3, my great Granddad died, I broke my arm, got chicken pox and was "gifted" with a little brother in September. I was not happy with this gift. I didn't ASK for him, I asked for a sister. I was also told that this crying little creature would be able to play with me and it would be great. Well, first off, he couldn't play with me, all he could do for a long time was cry, eat, sleep, get changed out of dirty nappies. And take my mother away from me. And all the attention I got from other people away from me. My mother used to have to tell people they should say hello to me BEFORE cooing over the baby, as I was, you know, there first and therefore used to people saying hello. I resented the hell out of him for a long time for this. Looking back at it now, I had this little brother who adored me, who I was a complete bitch to. Not something I'm proud of and I am hoping that our relationship will get better. Because he is an amazing person, who I truly do love.

He was a very pretty little boy.

At 9 I was ripped from this existence and we immigrated to the UK. An experience that requires a whole post or three in itself. It was not easy, it can't even be described as hard or difficult. It was hell for my father, my mother (my heavily pregnant mother) and myself, in different ways for each of us. The little brother was young enough to cope. He also has that personality that means he makes friends easily and bounces back from change in 5 seconds. I do not. I was (am still though I hide it very well) painfully shy, serious and do not take well to change.

At 10 years, one week, and 12 and a half hours (give or take a few minutes) after I was born, I was gifted with another little brother. Again, I'd asked for a sister, and didn't get it. Again, I sulked a little when I heard it was a brother and was in denial for the rest of the pregnancy. Looking back I think it had a lot to do with what I was going through at the time, and very little to do with the fact I wasn't getting a sister. But this time I realized that he was, truly, a gift. The day he was born, my dad came to pick up my brother and I from a friends house. The car broke down on the way to the hospital and the AA man drove us there, promising to pick us up again in an hour or so. They put this little (ugly, he was so ugly at first though my mother insists he wasn't) creature into my arms and the depth of the love I felt for him overwhelmed me. No one was going to hurt him. I was going to take care of him, make sure he grew up happy and loved.

As you can see, he didn't stay ugly for long. Unfortunately, he also didn't stay this little for long, either.

I went through the usual: secondary school, sixth form, university. University is where I first started going out at night, where I had my first kiss and where I met my first boyfriend. First kiss, coincidentally, was with my first boyfriend. Who still remains my boyfriend to this day, 5 years later.

Us in the first year of uni, the end of year summer do our residence had. Oh, Rat Bar, how we miss you.

Us last year at a friends wedding.

Ok, to avoid this post becoming even longer than it is, I am going to stop writing. I'll write about immigrating, school, university and the boyfriend another time. But for now I feel a bit like a child whose been running around the park all day: I'm shattered! Oh, I also have to go and pretend to do more dissertation work. I'll probably fail to do anything much, but as long as I pretend I've tried, I'll feel better.
Posted by Crysta at 15:20