After the excitement of the last post, where I'd manage to finish half of the dress, I have done no more work. It wasn't just that I had forgotten to blog, I just had nothing to blog about.

The reasons for lack of work haven't been laziness or procrastination, but that other things have had to take a more important place in my life for a while. First it was our anniversary on the 22nd February. My boyfriend had taken the weekend off work (he wanted to go away somewhere, but alas the life of being a student meant I couldn't afford to pay for my half), so I felt it would be a little mean if I then spent the entire time doing university work/sewing. So I had to get all my seminar work done before the weekend. We planned to go to Cadbury's world, but, luckily for my bank balance and waist line, we couldn't get tickets. So instead we headed to Warwick castle for the day on Sunday. I had an incredibly fun time, the boyfriend had an alright time (he's been to the castle three times now), but we all enjoyed the dungeons. Tip for anyone wanting to go: the online ticket prices are a heck of a lot cheaper than buying tickets on the day.

Here's a picture of the castle 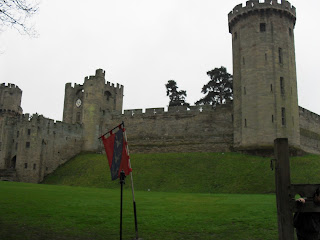 As it was our anniversary weekend, I also made the boyfriend pose for some photo's. 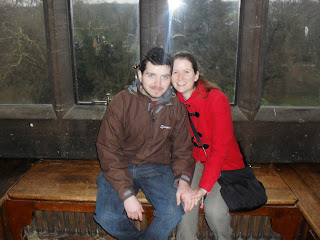 I'm not one of those clingy girlfriends who have to clutch onto their man with both hands...it was just a freezing cold day, I forgot my gloves and, well...it was the perfect opportunity to steal some of his body heat!


I bought him a minature orange tree for the actual anniversary. It was our fifth, and even though we aren't married I thought I'd go for a wooden gift. We also don't usually buy gifts for the day, but I came home to find half a dozen red roses waiting for me. Apparently my tree outshone his gift, but, since I have never, ever gotten flowers from him, and was never expecting any ever, I beg to differ.

We went out for tapas that night. I decided to have a caraf of wine with my meal and somehow got a little tipsy...And sent strange messages to a friend of mine. Who got upset. Not because of the messages, but because I'd gotten tipsy without him. Its a rare occurrance. And apparently I'm rather amusing when it happens. It possibly has something to do with the fact I get more affectionate and also a little child like. I'm usually the boring, sensible adult.

As for this week...my youngest brother is going up a level in his Air Cadets on the weekend, so I'm heading home for Sunday. Which means, again, having to get all my seminar work done. But I'm itching to finish the dress and am hoping to get back to working on it in the next few days.
Posted by Crysta at 18:11