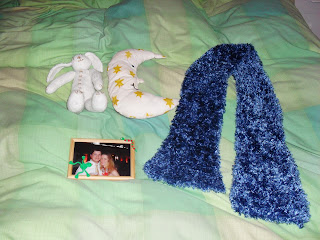 I said I would post some images of the little craft work I have done before, to show you what I'm up against when clothes making. My first ever project on the sewing machine, at school was the moon pillow. I completed the scarf a few years back, in my second year of university. The picture frame I made for my boyfriend before we headed to separate parts of the globe for a year and a half. And the bunny...the poor bunny I made just after New Years this year.

What is wrong with them, you ask? 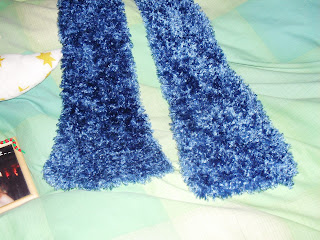 Well, somehow, with the scarf, I managed to get one side longer than the other. Its probably because it was the first time I had knitted and I got the tension wrong. I may have also dropped a few stitches. It was very hard to count with that wool. I've always found it very strange that the rest of the scarf was uniform in shape....

But, even though its not perfect, I still wear it. I tend to get fond of things I make/buy that have flaws. Plus I love the colour of the wool and its incredibly soft and warm around my neck. 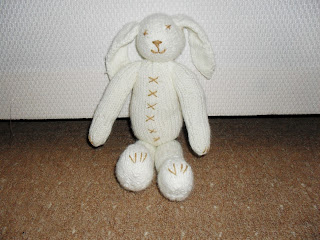 The bunny rabbit. Poor poor bunny rabbit. He came in a pack given to me by a friend for my birthday. I followed everything it said, but as this was my first knitting project I have done for a while, the poor thing doesn't look quite right. His head tilts, one ear is higher than the other...He also seems to have very broad shoulders and a tiny head. When showing him to my boyfriend, he mentioned some of these things, at which point I listed all the things wrong with the rabbit. At which point said boyfriend looked at the rabbit with what can only be described as a paternal look, clutched it to his chest and he has been defensive over the thing ever since. 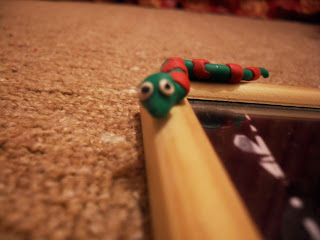 There are a few things I've made that I quite like. The first is this picture frame I made. I got a plain wooden one from Asda and one night a friend and I sat in front of the TV making animal shapes out of clay. I did this in front of my boyfriend, who knew nothing of my plan of making a picture frame for him. I especially love the eyes on the snake. The frog had eyes, too, but, due to the frame travelling to Australia, back to England, and followed my boyfriend several places in England, they have fallen off. We have the one... just need to find the other 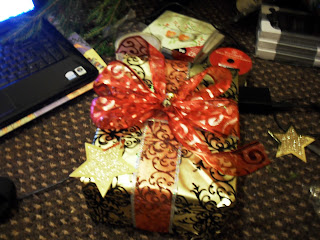 Another thing I love doing, and that I'm good at is wrapping presents. I absolutely love sitting down at Christmas and coming up with different things to put on the gifts and in the gifts. This year I went all out and placed the gifts in various small boxes I had lying around, then topped them off with ribbons and bells. My friends were very impressed when they got them, although one (a male friend, I might add) was very disappointed when he opened his box. I'd put his gifts in a Lush box I had lying around and he was hoping to get a massive box full of bath products. He didn't.

Actually, thinking about it, my best work is always when I've made something for other people. Another thing I've done (not on here because I don't know where it is) was a cross stitch card for the boyfriend. It took me three years to complete due to the fact I'd do a bit and then forget about it for three months, but it looked good!

Feeling a little more optimistic about the clothes making...Perhaps I'm not as uncreative as I think I am. Then again, my creative side only seems to really come out when making things for others. Hmmm...perhaps I'll pretend I'm making it for someone else...
Posted by Crysta at 22:26